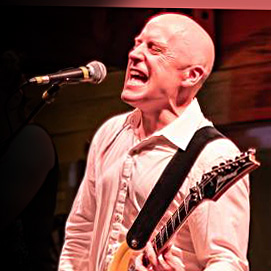 Huetensil is independent singer/guitarist/songwriter Hugh Wygmans’ musical alter ego.  A bit of a freak, he’s primarily a power pop musician with a hard edge and an indie singer/songwriter ethic.  He combines ecstatic guitar riffs with honest, intelligent lyrics that he delivers with stunningly versatile vocals.

Definitely not your typical singer/songwriter.  Huetensil is a rock music fan who enjoys all of the disparate forms that the genre can take.  Having grown up listening to a wide range of music and being influenced by eclectic artists, Huetensil's music can be a bit schizophrenic.  Like many of the most celebrated artists, he loves experimenting, learning and trying new things.  Which explains why the music that he creates is so varied and often incongruous.

On stage, he’s a high energy spectacle.  Filled with nervous energy, constantly moving as he sings, plays guitar or both.  As he says in “Addicted.”  “I just love standing on the stage / My heart is racing and my voice is filled with rage.”  You get the picture.  He puts everything he has into each performance.  Usually ending the evening with sweat pouring from him, exhausted but content that he’s given the audience his best.

As Huetensil and as the frontman for progressive rock band Question of Honour, he's been heard on over 130 radio stations in eight countries.  He’s also had a lot of nice things written about his music.

“(Wygmans’ voice) swoops and soars and whines and pulls delicious little melodies out of thin air.” - Sid Sibley, In Your Speakers

“... Hugh Wygmans has chops to burn and a knack for melodies that linger long after the song is gone.” - Mike O’Cull, Illinois Entertainer

“Huetensil goes from regular singing voice to falsetto to absolutely ass-kicking screaming flawlessly, effortlessly, seamlessly.” - Ozone in the AM, The National Police Gazette